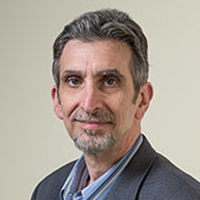 Phillip Simon has been creating productions using interactive media and the internet for almost 20 years. He specializes in user-interface design and information architecture for Web sites including the use of film, video, and animation. Phill is also an expert in online learning systems. Phill spent 22 years at Yale University working as a video producer, managing editor of the Center for Advanced Instructional Media, director of the Department of Biomedical Communications, and director of Operations for web design and development at the Yale School of Medicine.

In 2009 Quinnipiac University hired Phill to run their interactive media graduate program. He helped to revamp the graduate program to better serve today’s students who learn in an online environment. Now Phill teaches in the Department of Interactive Media and Design as a senior instructor and an assistant professor in the Department of Medical Sciences at the Frank H. Netter School of Medicine. Courses include topics on user experience design, content strategy, user research, audio-video design, and visual design.

Because of his expertise, Phill has also worked as a freelance web developer, photographer, video producer, and computer graphics designer. He has served as a program designer and project manager on web-based scientific research, web-based clinical interventions, and database applications. Phill provides the creative and technical vision required for website development and interactive communications. Through the years his clients have come to depend on him to put that vision into a pragmatic plan for their digital projects.

Phill brings a broad practical knowledge in organizational management that includes working within budgets and managing contracts in addition to his first-hand experiences in logistical operations, technology advancement, intellectual property, and copyright issues.

Phill has spoken at national conferences on health science communications and Web-based Learning for over ten years. Phill received his bachelor’s degree in printmaking from the University of the Arts in Philadelphia, PA, and completed a master’s degree in liberal studies at Wesleyan University in 2000.